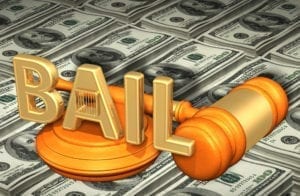 In 2016, over 10 million arrests were made by law enforcement agencies.

If the crime is serious enough, a court may order the defendant or their loved ones to pay bail, which is set to assure that the defendant shows up to court after being released.

If bail is required, there are three options: either pay the bail and leave jail, sit in jail until their court date, or use bail bonds to get out of jail.

Seeing that many people do not have the liquid savings required to post bail, bail bonds are a common solution that defendants and their loved ones turn to.

Here’s your succinct and complete guide to all things bail bonds.

What Are Bail Bonds?

Bail bonds are insurance policies accepted by a court that the entire bail amount will be paid if a defendant fails to show up to court.

Bail bonds are often fees (usually 15% of the bail amount), collateral, or a combination or the two, that are imposed on a defendant or their loved ones when released on bail.

For example, an individual required to pay $5,000 in bail could be charged a premium of $750 by the bail bond agent to post the bond.

If the defendant shows up to court, the individual is only charged the $7500 premium. However, if the defendant fails to show up for court, the entire $5,000 will have to be reimbursed to the agent in addition to the premium already paid. Sometimes, investigators may also be hired to find the defendant so the insurance company’s bond is returned.

There are two types of bail bonds: criminal bail bonds and civil bail bonds, based on the nature of the offense.

What Are the Limitations of Bail Bonds?

Certain states do not allow posting bail for profit, and these include: Oregon, Nebraska, Wisconsin, Illinois, Kentucky, Washington D.C., Massachusetts, and Maine. These states are more likely to require defendants or their families to pay a percentage of the bail bond rather than the entire amount.

In these states, if a person flees, local law enforcement arrests the defendant.

How Can I Acquire Bail Bonds?

As mentioned above, you will have to see a bail bond agent to acquire bail bonds.

These agents can require collateral (including vehicles, real estate, etc.) and/or a premium rate to post a bond.

Once a bail bond is acquired, it is very important for the defendant to not miss their court date, or often several court dates. Other stipulations are occasionally also required, such as attending drug and alcohol education programs.

If a loved one has recently been arrested, then you should know that you can get them out of jail without having to go into debt or lose your entire savings.

Instead, bail bonds are used to avoid the financial drain of posting bail yourself. If you’re looking for information on bail bonds in Raleigh, North Carolina or within Wake County, contact us anytime today.