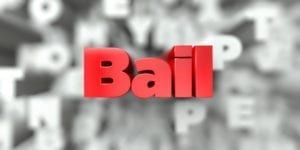 Being accused of a crime is a frightening thing, and you’ll want to be in jail for as little time as possible.

Thanks to bail bonds, you can take back some freedom and normalcy while you await your trial day.

So what is a bail bond, and what are some bail bond terms you’ll encounter following an arrest? Read on to learn more.

How Does Bail Work?

The purpose of bail is to release an individual arrested and accused of a crime (a defendant) back into civilian life in the intermediate time between their arrest and their court date.

Trials can come months or even years after an arrest. Because of the delay, bail allows the defendant to work and be with his or her family in the meantime. It also saves the state money by not housing the defendant in jail.

Bail refers to the actual money you give to the courts in a bail scenario.

Bail acts as a sort of security deposit. You give the courts money, which they will hold on to as assurance that you show up to your trial proceedings and won’t go on the run once released.

If you follow through, attend your court dates, and are proven innocent, your bail is returned to you.

In some cases, a defendant can pay bail directly to the court. Bail for less serious offenses like misdemeanors might only be a few hundred dollars.

But bail gets more expensive for bigger offenses. Wall Street insider Michael Milken holds the record for biggest bail payment in US history at a whopping $250 million.

Many defendants don’t have sufficient cash laying around to post bail on their own. That’s where a bail bondsman comes in.

A bondsman can post the bail amount on behalf of the defendant. In exchange for the service, the bondsman will charge the defendant a small percentage of the bail as a fee.

A bond is a written contract between a defendant and a bail bondsman that states the bail conditions.

A defendant must agree to and sign the bond contract in order for the bondsman to post the bail.

A bond will include the bondsman’s fee as well as the instructions and requirements for the defendant.

Just as bail acts as a type of security deposit for the courts, collateral is a security agreed upon by the defendant to give to the bondsman in case the defendant does not fulfill the agreement.

Rather than money, collateral is usually possessions, including jewelry, cars, and houses.

Bail itself is not a punishment for a crime. If the defendant is compliant and shows up to court as instructed, the bail money can be returned.

But if the defendant is a no-show on his trial day, he or she forfeits their bail money. The court gets to keep the money, the bondsman can take the collateral, and an arrest warrant is put out for the defendant.

Get Help With Bail

If you’re in need of a bail bond in Wake County, Raleigh Bail Bonds can help.

Contact us today to talk with a bondsman near your area.